A few thoughts and perspectives on recent declines in the stock and bond markets.

Since the peak in the equities market on January 4th, 2022, declines have been significant, down -14.25% through April 30th. Please note the following chart showing maximum intra-year declines in each year since 1980. As the chart displays, this year's decline is meaningful, but not out of the ordinary. That said, it is only natural for our attitudes to shift from, "how much can I make?" to, "how much can I afford to lose?" when short-term returns turn negative. 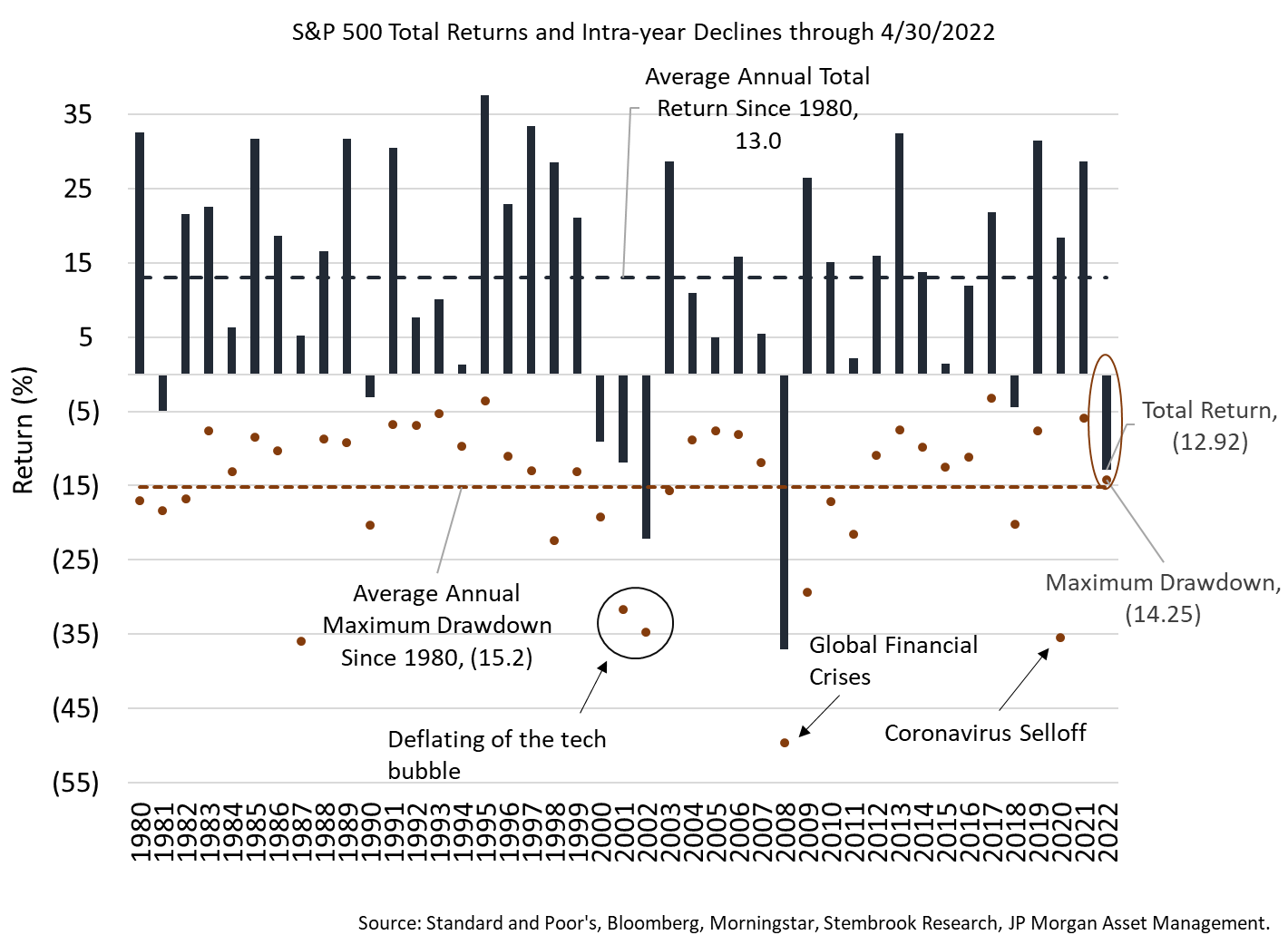 A number of variables are conspiring to make the near-future less certain. Inflation has spiked, caused mostly by a deliberate shut-down and re-boot of the global economy. This induced consumers to come out of the pandemic itching to buy, while the means of production was struggling to come back online. Consumer's wallets are fairly full with stimulus from the federal government and higher wages. Artificially low interest rates, engineered by central banks, have been a constant source of stimulus since the Global Financial Crisis in 2008-9. Fossil fuel producers have underinvested in drilling, reducing supply of oil and natural gas.

Before the war in Ukraine started, we had a number adjustments ahead. We had dodged a global recession during the pandemic, but there was (and still is) some cleanup to do. The war has only compounded prior imbalances. When Russia invaded Ukraine, the world applied heavy economic sanctions, deliberately limiting the supply of energy to most markets. Energy producers will need to ramp up production to meet growing demand for oil and natural gas, which will ultimately bring prices down. Alternative energy spending will likely rise, though the pace of that increase won't be nearly quick enough to address current shortages.

Central banks are reacting to higher inflation by raising interest rates. If policy makers thread the needle, we'll have a shot at a soft landing. If they don't and interest rates rise enough, we will likely have a recession. If we get a recession, it would not be the first and it won't be the last.

What is next for portfolios?

Bond prices have fallen as interest rates have risen (see chart immediately below). We have noted this phenomenon in the past and have been actively limiting this risk in portfolios, which has helped to moderate losses. We have since moved our bond portfolio duration (think maturity) up, but are still less exposed to rising interest rates than benchmarks. We have also owned a modest position in inflation linked bonds - or TIPS - which provide some inflation protection. We are currently looking at other investments in the fixed income space that may offer attractive risk/reward prospects as rates rise. On a positive note, as rates rise, bonds become more viable as a source of income and stability in portfolios.

As interest rates rise, stock valuations tend to fall, all else equal. Higher rates also mean that the cost of financing for companies increases. If rates rise at a steady pace and peak at modestly higher levels, this can be a healthy adjustment. If they rise quickly and end at a significantly higher level, stocks would likely fare less well. We continue to believe that the former scenario is more likely.  Currently, the impact of higher rates is hitting hardest in the tech sector. We were too early in taking our first small position in tech, which has so far lost money. That said, this is part of a longer term strategy to acquire innovative companies at lower prices. The value portion of our portfolio has performed well.  Emerging Markets have been hit hard as the war in Ukraine progressed. As we usually do, we use downward moves to look for opportunities and we continue to do so.

We have capitalized on rising commodity prices by owning energy producers, which have done very well. While they have not done as well as commodities themselves, we viewed them as a more reasonable risk.

Making Sure Your Risk Level is Appropriate

We work hard to make sure that your portfolio and the risk you are taking is well-suited to your situation and disposition. This means making sure you have the cash on hand - either through income or stable investments - to weather the inevitable downward moves in markets. We feel confident that every one of our clients is well situated. That said, we will be reaching out to check in and make sure you feel the same.

In many ways, investing is a state of mind and we'd even say an act of faith. Over time, owning shares in companies has far outpaced ownership in bonds or cash. This is especially true when we take inflation into consideration. When we invest at Stembrook, we ask our clients to keep this in mind when the boat starts to rock. We think the following charts are worth reviewing, at this time:

Over time, stocks have far outpaced bonds, cash and inflation 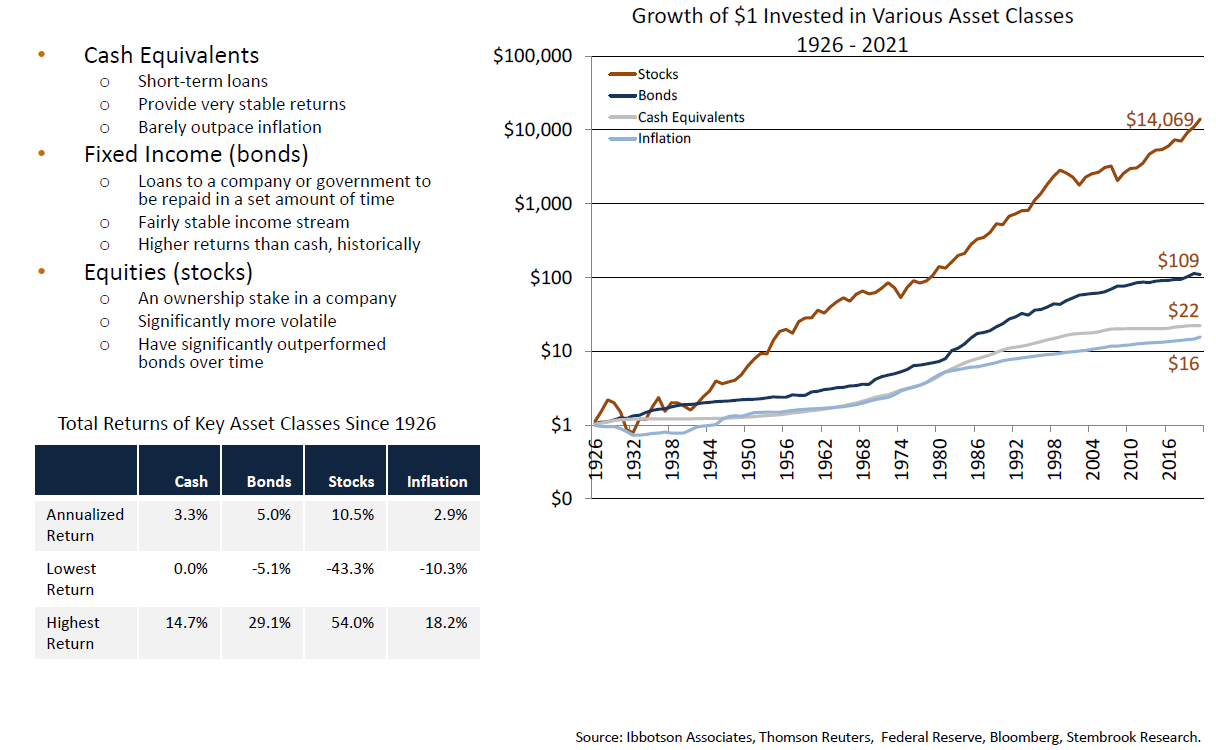 Most years, stocks are up, some years they are not. 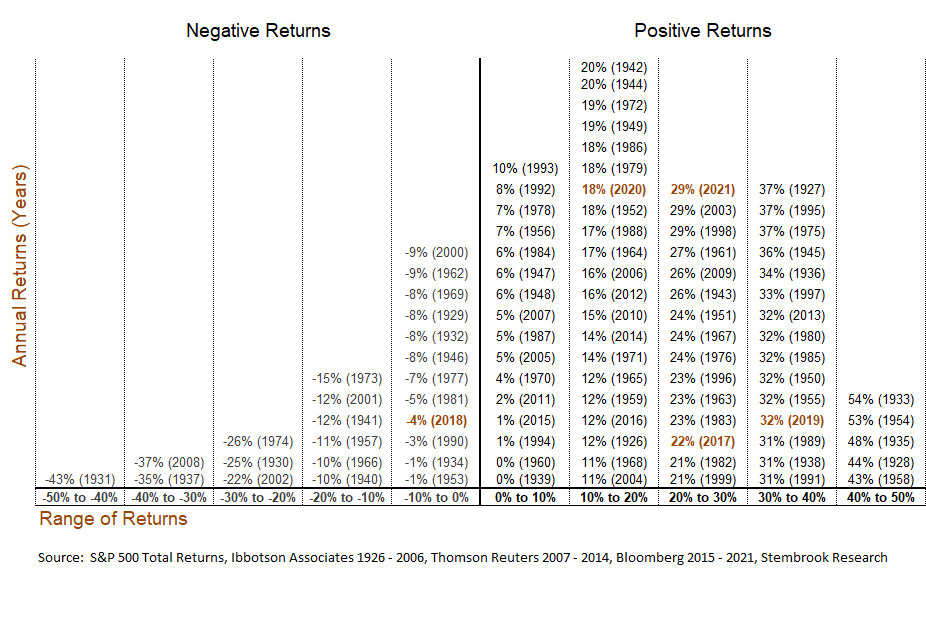 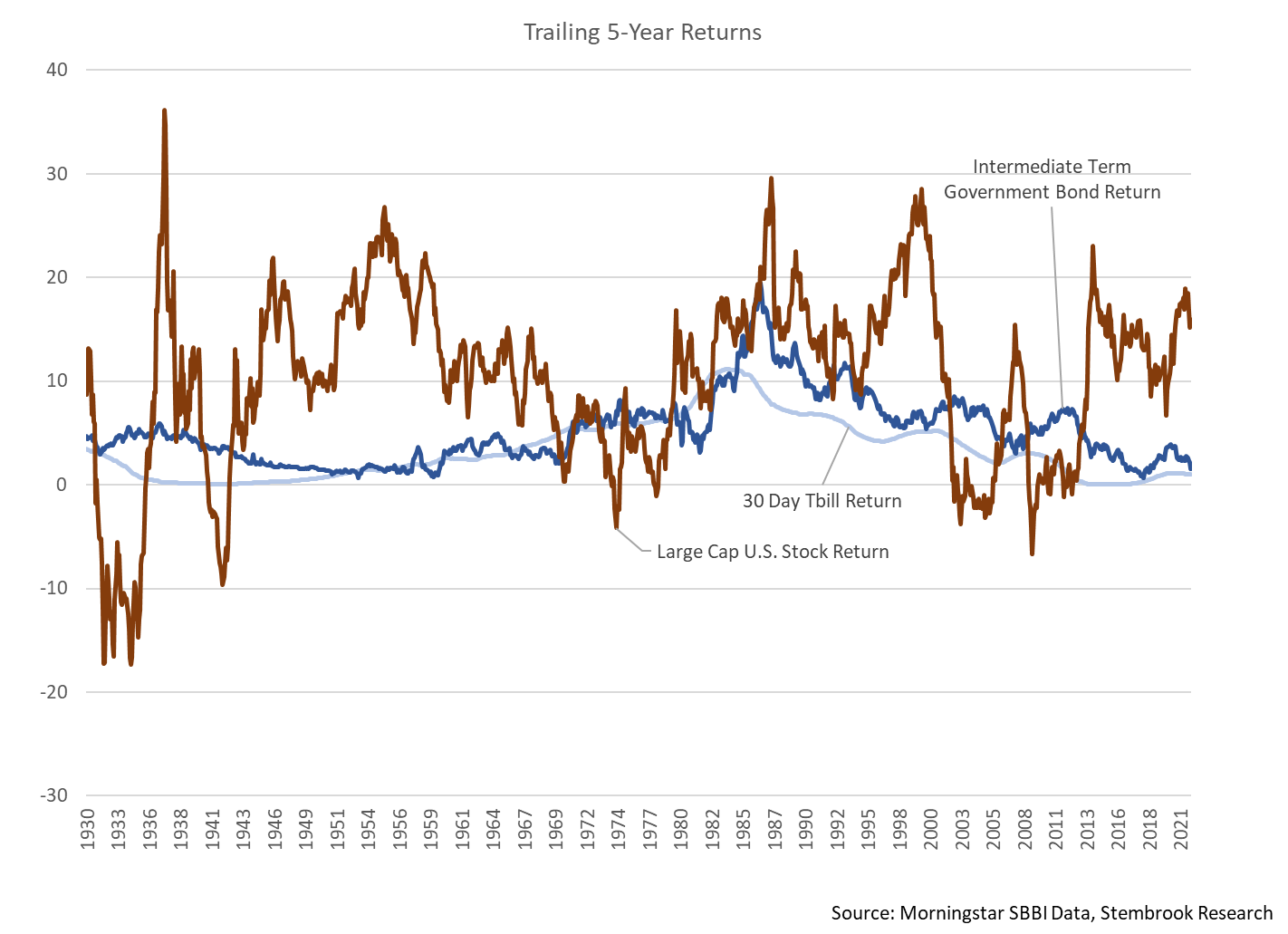 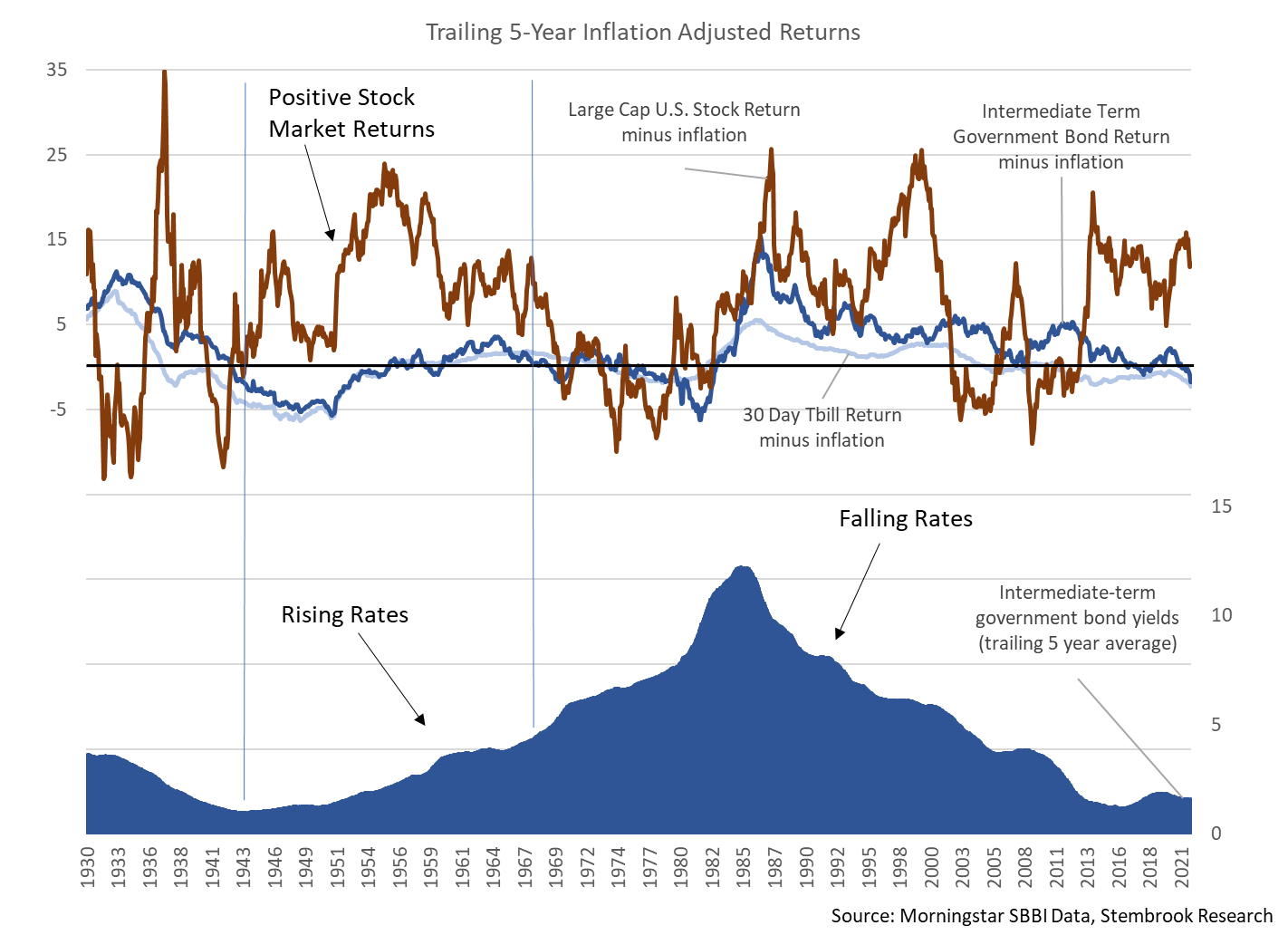 As always, we thank you for your continued confidence in our investment management and advice and welcome your comments and questions.